Sea glass, shells and pottery shards can be found the world over in many, many places but here are a sampling of beach treasures that can only be found in one (or a few) locales…if you happen to find one, you are a LUCKY COMBER indeed!

The Coco-de-Mer palm tree produces a peculiar two headed seed. Endemic to only two of the 115 Seychelle Islands, the cocoa de mer seed is the world’s largest and most valuable seed. Over the centuries, these seeds washed up on deserted beaches or were found floating on the waves throughout the Indian Ocean.

Their suggestive two-lobed form gave rise to many names (“the love nut”) and legends (that they possessed aphrodisiac powers). The Seychelles government is very protective of the plant nowadays because it is a threatened species due to over-collection, alien invasive species, and an increasing frequency of fires (exacerbated by climate change).

Slag glass is one of the rarer genres of sea glass, found only in areas where glass products were destroyed in furnaces. The residue was then tossed in nearby pits or waterways. Some of the most beautiful examples of slag glass can be found on the the Big Island’s Hamakua Coast where glass trash from the sugar plantation communities were destroyed in the same furnaces that helped produce sugar from the sugar cane plants.  The resulting residue was dumped into nearby waterways, which fed into the Pacific ocean, and tumbled about for decades in the rough currents, waves and harsh lava cobbles. Slag glass found on those beaches appear as beautiful colored rocks whose colors range from cream to black, but the finest shards are shade of turquoise or jade green.

These beautiful stones, found on the shores near the town of Petoskey, Michigan, are really fossilized corals dating back to the Devonian period over 350 million years ago. Back then, Michigan was located near the equator and was covered by a warm, shallow, saltwater sea, which thrived with other marine life in tropical reefs. Over time, as the earth’s plates moved, the area we know as Michigan was pushed northward and above sea level. Two million years ago, glacial action spread the fossils across the Michigan’s northern Lower Peninsula, depositing major concentrations in the Petoskey area. When dry, the stone resembles ordinary limestone but when wet or polished, a mottled pattern of six-sided coral fossils emerges.

This one (my first red sea glass find) came from the central Chesapeake Bay area of Maryland. Long a regional bastion (sadly) of duck hunting, wooden duck decoys with glass eyes were a big part of luring the ducks within shooting range. The only other areas where you will find anything similar is in regions where decoys with glass  eyes were used such as Virginia, Maine and Michigan. 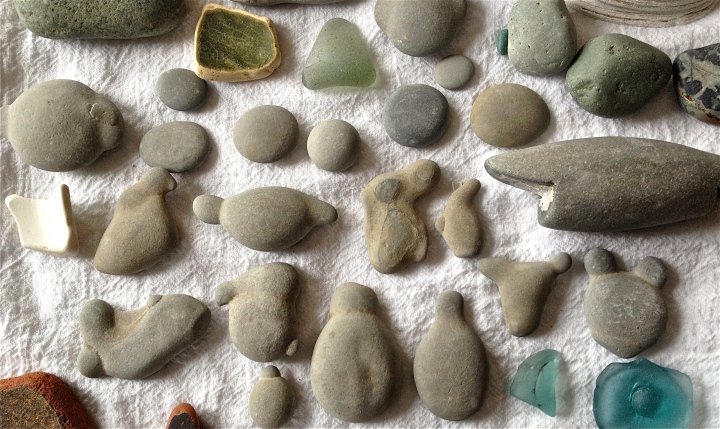 The best beaches to find Miocene-Era fossils (17 million to 20 million years old) are below Calvert Cliffs on the central western shore of Maryland. The cliffs are comprised of a clay-like sand that is constantly eroding. As it erodes, fossils drop into the bay waters and then wash back in especially during the more turbulent winter weather months. Common finds include corals, marinemammal bones; shark, dolphin and skate teeth; shells; and fossil molds.

These rubber tablets with “Tjipetir” stamped on them have recently been turning up in England, France, Holland and Germany, all with the word ‘Tjipetir.’ Beachcomb “archaeologists” have traced the tablets back to an early 20th century rubber plantation in Indonesia and surmise the tablets must have come from a 20th century shipwreck, which occurred somewhere near England (where the majority of tablets turn up.

One thought on “Location-Specific Beach Finds”